Ignore instructions from their doctors?

Insist on doing things their own way, even if that makes their own or others’ lives more difficult, inconvenient or unsafe?

It proved a widespread complaint.

In an initial study of 189 adult children and their parents, Dr. Heid and her colleagues found that 77 percent of children (average age: 55) reported stubborn behavior by their parents, at least sometimes

But two-thirds of the parents (average age: 80) described themselves as stubborn, too.

In a later study, the researchers asked 192 middle-aged children to keep a seven-day diary of parental interactions. Of those who had contact with their parents that week, 31 percent reported “insistent” behaviors and 17 percent reported “risky” behaviors; 11 percent said they encountered both.

“The stories are endless,” said Dr. Heid, whose interest in the subject was sparked by a grandmother determined to shovel snow, despite her children’s protests, into her 80s.

Lori Kayne, a geriatric social worker in Bridgewater, N.J., can tell such stories. Her late father, whose poor balance had caused multiple falls but no serious injuries, resisted her pleas to use his walker. “We had a lot of screaming matches,” she recalled — but she never prevailed.

Then last year, her father fell and fractured several vertebrae. “He was in terrible agony for months,” Ms. Kayne said — but at least he was finally relying on the walker. She figured that at 87, he’d grown more reasonable.

Nope. “As soon as he started to feel better, he refused the walker, even though he knew what could happen,” Ms. Kayne said, sighing.

Laura Perry has seen similar battles. Her father-in-law, 87, worried about skin cancer. When he needed a ride to a dermatologist’s office, Ms. Perry, who lives nearby in Glastonbury, Conn., obliged.

During the appointment, she recalled, her father-in-law indicated which skin lesion he wanted biopsied. The doctor replied that after examining all his patient’s lesions, he would decide which, if any, warranted testing.

The more polite social science term for such skirmishes: mismatched goals. “If the goal is not shared — the older adult wants to walk to the grocery store himself and the child says, ‘I don’t think it’s a good idea’ — that’s when conflict can arise,” Dr. Heid explained.

Such clashes, and related reports of stubbornness, increase when the parent and child live together, she found. Perceived stubbornness also rises when a parent’s disability increases.

“When a child steps in, most commonly there’s a safety issue,” Dr. Heid said. “The parent may not share those feelings about their capabilities.”

These familiar, probably universal, safety-versus-autonomy debates have led some critics to object that adult children overemphasize the former, when what matters more to their parents is maintaining independence and pursuing what they find meaningful.

When parents feel thwarted, does resistance really constitute stubbornness? Perhaps their children, who in these studies were not serving as hands-on caregivers, were domineering or intrusive.

Stubbornness might actually be a positive trait, Dr. Heid suggested. It shows tenacity, persistence, a sense of control.

But stubbornness, it turns out, can also have hurtful consequences. In Dr. Heid’s largest study, involving nearly 400 middle-aged children, the most common response was avoidance: Children back off and let the contested issue go.

“But when they do, they report more depressive symptoms and less positive relationships,” Dr. Heid said. “They may be internalizing their distress.”

Arguing with one’s parents has similarly unhappy outcomes. What helps, the study shows, is reasoning. “It allows for a more open exchange of views and more discussion,” Dr. Heid said.

Reasoning with someone who seems impervious to it sounds, well, challenging. “It’s a really hard thing, this mismatch between what we need and what we want and what’s good for us,” said Marci Gleason, a social psychologist at the University of Texas at Austin.

Social scientists have learned that older adults who provide support have increased well-being and better health. Receiving help, on the other hand, is associated with negative mood.

After decades of helping their children, older people understandably balk at becoming dependent on them. “Even if intellectually they accept it, actually receiving help is difficult,” Dr. Gleason said. “It can signal that you’re not needed, and people want to feel needed.”

She suggests trying to equalize power in the relationship, allowing the parent to also provide support, even by just listening empathetically to a child’s account of her tough week. “It could be beneficial for the relationship to not have it all be one-sided,” Dr. Gleason said.

She’s also a fan of incremental progress, a negotiation that leads to a more reciprocal exchange. 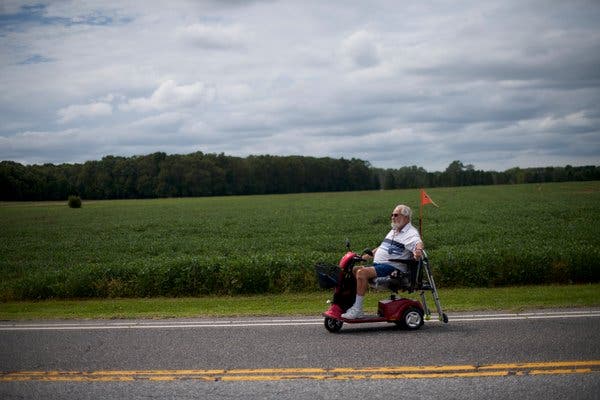 As proof of concept, meet the Abrams family.

In 2016, the family was worried about his driving. Mr. Abrams had knocked several side mirrors off his Buick, sometimes wandered out of his lane, once fell asleep at the wheel and sideswiped a truck. It was time to relinquish the keys, the family said.

After extended wrangling, Mr. Abrams agreed to a retest by the state motor vehicle agency, a gambit that backfired. “We were convinced he would fail, but he aced it,” said his daughter.

Months passed; his wife began refusing to ride with him. The family negotiated a series of escalating restrictions: First, Mr. Abrams agreed not to drive at night. Then, to drive only to familiar places. Finally, to stay within five miles of home.

“Sometimes he would blow up,” Tamar Abrams said. “But if you gave him some time and then returned to the discussion, he’d be O.K.”

Now, Mr. Abrams relies on a bright red, battery-powered scooter. “An excellent compromise,” he said. “If it wasn’t for the scooter, I’d go crazy in the house.”

Twice weekly, he cruises two miles to have lunch at Applebee’s, where the servers all know his name, and picks up a few groceries on his way home.

“If he didn’t have to cross a major intersection, it would be a lovely ritual,” Tamar Abrams said. Nobody (except Mr. Abrams) feels good about his navigating across six lanes on his scooter, even at a traffic light.

But she understands. “You’re holding on for dear life to who you think you are,” she said. So, “we hold our breath and let him do it.”

A version of this article appears in print on Sept. 3, 2019, Section D, Page 5 of the New York edition with the headline: Aging Parents’ Willfulness May Be ‘Mismatched Goals